Built for security officers, the Pro V2 combines trusted non-lethal tools, 2-way communication and audio and video capabilities into one unit. This compact, lightweight device allows security officers to effectively protect themselves and others by deploying an intermediate, layered defense response and recording incidents in real time. The Pro V2 is legal in all 50 states, safe and non-lethal, making it ideal for campus security, workplace environments, sports and public venues, hospitals and other places where security’s priority is to observe and report, and when the situation calls for de-escalation with minimal risk.

Get Pricing and Availability

If a security force is unarmed and the officers are underequipped to deal with an escalating situation, lives and property are at stake. If officers are armed, they have only one response in order to de-escalate a situation: lethal force. Either situation is a no-win. Intermediate response is the new category that resolves a potentially violent altercation from within a protective buffer zone, with full recording and two way communication capability.

The Pro V2’s layered defense approach involves three escalating levels of security. All features can be customized to accommodate the user or location’s needs. 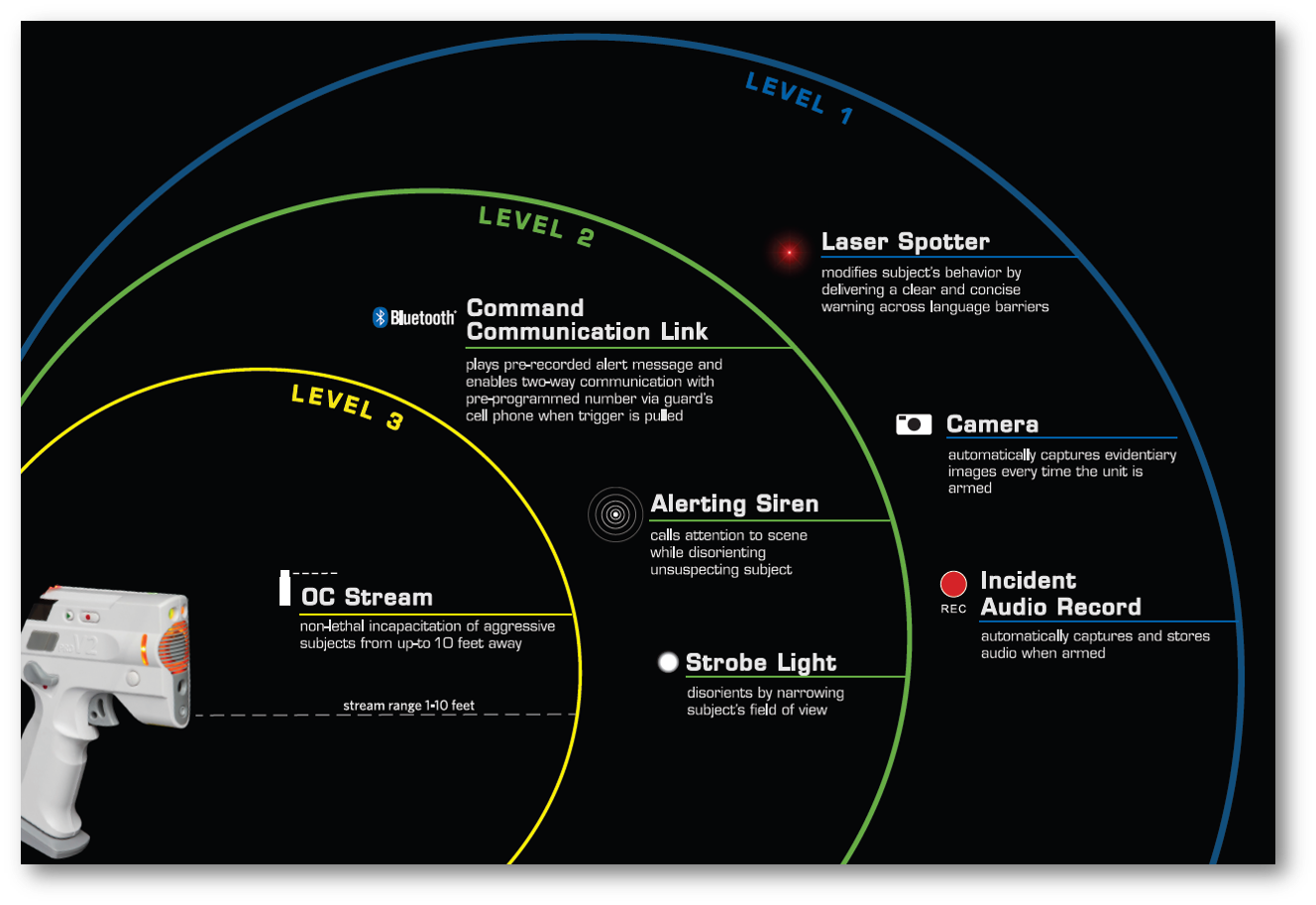 The user activates the unit with an ambidextrous arming switch, which turns on the laser spotter and alerts the subject that an officer is on the scene. The device also begins recording the incident.

Pulling the trigger halfway activates the siren and strobe light, both of which disorient the aggressor. The Pro V2 automatically calls a number of your choice and sends a pre-recorded message via Bluetooth. All Level 1 Response features remain activated during a Level 2 Response.

A full trigger pull deploys the unit’s precision OC stream. The stream will continue as long as the trigger is fully pulled or until the canister runs out, whichever comes first. All Level 1 and Level 2 Response features remain active during a Level 3 Response.

How We Made OC Better: Precision Stream

Oleoresin Capsicum, or OC, is best known for its most popular form: pepper spray. Many security officers carry OC on their tool belts because they know it has a proven ability to subdue aggressors without permanently injuring them. Although OC is effective, traditional pepper spray deployment has several drawbacks, including a short range, inefficient cone-shaped dispersal, and risk of cross-contamination for the officer and surrounding people. Guardian 8 has solved this problem by incorporating our patented precision stream technology in the Pro V2.

Product manufacturing. We made it possible to deliver a precise hit 10 feet away using laser aiming.

No overspray. Stream, not cone, dispersal means the OC only hits the target – not everyone and everything around him or her.

Less is more. Traditional pepper spray canisters hold 2.5 ounces of OC, but are typically depleted after only one use. Our OC does the job with 1/40th the amount of traditional product – precision stream deploys so efficiently that our 0.54 ounce canisters can be used eight times.

Questions About the Pro V2?